Quokkas, as this dreadful survey and campaign continues, and the equality campaign misteps (that text!), we have compiled a list of other things you can be doing other than voting, if you were even able to, and social mediaing, about which Steph has complicated feelings.

END_OF_DOCUMENT_TOKEN_TO_BE_REPLACED

Today, No Award would like to introduce you to Judy Small, a queer, Australian protest song folk singer, who sings about social justice issues, who happens to be a Federal Circuit Court Judge.

END_OF_DOCUMENT_TOKEN_TO_BE_REPLACED

No Award is very pleased to bring you a guest post today from Rivqa Rafael about the Problem Daughters anthology, and the processes the editors are going through to create a diverse and inclusive anthology.

Problem Daughters will amplify the voices of women who are sometimes excluded from mainstream feminism. It will be an anthology of beautiful, thoughtful, unconventional speculative fiction and poetry around the theme of intersectional feminism, with a specific focus on the lives and experiences of women of colour, QUILTBAG women, disabled women, sex workers, and any intersection of these.

END_OF_DOCUMENT_TOKEN_TO_BE_REPLACED

Hey we dunno if you quokkas noticed, but the USA Supreme Court (abbreviated hilariously to SCOTUS) legalised marriage equality across their entire country. Good work, SCOTUS!

Many people are having feels, and Facebook is a literal rainbow. When a flatmate of No Award asked Steph what she thought, she said “I don’t celebrate other peoples’ wins.” Which is maybe a bit harsh. And yet not actually a lie! Especially because all those Facebook rainbows are just a literal rainbow washing and No Award is made up of curmudgeons who believe in online activism but don’t trust Facie. (And also have odd feelings about confirmed straight people turning their wedding photos rainbow.)

(Also, they are giving Liz a bad headache.  Enough with the bright colours and sparkly gifs, guys!)

But the equality movement in Australia is already so, often negatively, impacted by the US-centricity of discussions and actions, and as you know No Award rails against the way US-centricity skews and distorts Australian discussions in irrelevant ways.

Take this tumblr meme for example: 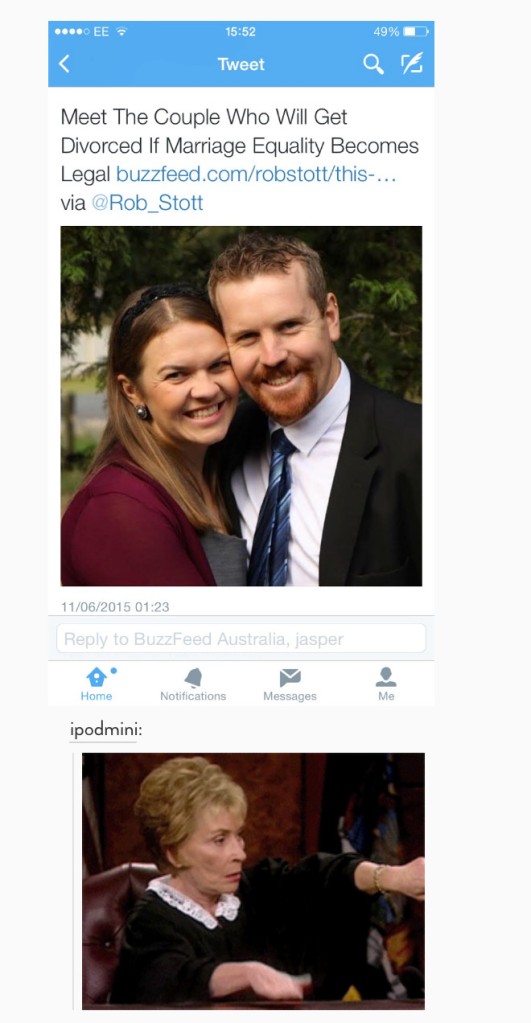 (That bottom image of Judge Judy is usually a gif of her tapping her watch as if to say ‘get on with it.’)

This post, and others that we’ve seen much like it, have hundreds of thousands of notes. But the important thing to remember is that this couple is Australian, as you quokkas know, and therefore three things:

(Please note, No Award is not qualified to give legal advice.)

There are some Equal Love marriage equality rallies coming up across Australia, if that’s your jam. Melbourne, Perth so far. This piece on tumblr is an interesting piece of grassroots history around recent marriage equality stuff in Australia.

It’s awesome for the USA that this decision has been handed down. But it doesn’t impact us directly, and placing too much importance on it means we’re missing the specifics of how our situation is impacted and how our situation can change.

(Endnote: please note that anyone who says ‘gay marriage’ is going to get in very big trouble. It’s marriage equality, because it impacts more than just gay people. We are bi and queer and asexual and intersex and trans and a whole rainbow of stuff)

ETA: Please read the comments! They are filled with relevant comments from constitutional law geeks and the children of religious ministers.