END_OF_DOCUMENT_TOKEN_TO_BE_REPLACED

Peter Combe has prepared a generation of Australians for Our Climate Dystopia.

Climate change is happening, and we are ready.

Is it any wonder Gen Y is so tuned into climate change? We know what’s going on; we’ve always known. The sun is hot and over long; overgrazing is damaging the local ecology, which is leading to erosion and further ecological damage.

Join Official Potato Moya and Steph on an indepth analysis of Peter Combe’s influence on Australians of the 80s and 90s.

END_OF_DOCUMENT_TOKEN_TO_BE_REPLACED

Important shark radar: OCEARCH, tracking international sharks. And a Western Australian shark tracker: Shark Smart.  Please note that the WA State Government engages in disgusting anti-shark behaviour, and No Award’s linking to the Shark Smart site is only so you can gaze respectfully and lovingly at the sharks in Western Australian waters.

There’s sharks in Monday’s First Dog on the Moon, and it’s a good reminder that even sharks can be right-wing.

Williams was minding his own business at Jeffreys Bay off the coast of South African, when a chance encounter with professional surfer and full-time Aussie Mick Fanning left him facing a series of potentially lethal blows.

Which is the shark news reporting on this incident reported Monday morning.

If you’re interested in getting angry about our anti-shark Australian media, the shark tag at Our ABC is worth the occasional visit.

And a reminder that if you want to get angry about a misuse of meteorology and sharks at the same time, Sharknado 3 is coming. No Award will not deign to link to it, but  might get drunk and watch it.

Why does No Award like sharks so much? They eat both penguins and cephalopods. But we can all live in awesomeness, I guess.

In fact, why don’t you watch this video for 2 minutes before we start this post. No Award and the Friends of No Award have watched this several times and cried with laughter every time.

This post was mostly inspired by Mad Max fandom. What Steph loves the very most about Mad Max fandom is that it’s full of grumpy Australians being really grumpy about non-Australians (mostly Americans) Getting Things Wrong. Steph is one of these Australians, all get off my lawn and get out of my car, and definitely get out of my town of 2 million people that doesn’t have a Starbucks. She’s a little bit obsessed with an epic coffee shop AU set in a small town in Australia. It has a Starbucks and a piano bar but no pub. NO PUB. Not gonna link the AU because it’s not about making fun of fanfic, it’s about making fun of Americans in general, and revelling in our own ridiculousness.

And so, for the humour and wtf of all Australians, we present:

A Pub With No Beer: Australian slang that foreigners* misuse

END_OF_DOCUMENT_TOKEN_TO_BE_REPLACED

By two Australians. Because what is Mad Max if not a great Aussie road trip?

You can check out this entire excellent mix (completely out of order!) at YouTube:

Or you can hear it in order, but missing a couple of tracks, via Spotify. And why isn’t AC/DC on Spotify, anyway? What is this un-Australian nonsense?

The 2009 short film ‘This is Perth’ revealed the existence of Bertie the Giant Squid to the world in general, and as an Australian blog, and with Steph a Perthie and Liz a cephalopod admirer, it’s important we chat about this Perth local.

His presence was further revealed when George Jones and the Giant Squid aired at some film festival in the USA in 2012, garnering Bertie an international fanbase.

George Jones and the Giant Squid from Ella Wright on Vimeo.

George Jones and the Giant Squid arguably fictionalises Bertie a little bit, setting His presence off a small island – which Perth is in spirit but not, at this time, in geography – but otherwise remaining true to Him.

Bertie accepts our presence on the Swan and around Perth, but only with offerings and due diligence and respect (we are named ‘sandgropers’, after all, which surely implies a kind of creature harkening back to Him). If you are coming to Perth, please note the courtesies one is expected to pay Him.

Please, Perthies and visitors, share your stories of Bertie in the comments.

On Monday, Invasion Day (though you may know it as Australia Day), we woke to the news that Prime Minister Tony Abbott had looked at all the Australians deserving of recognition for their achievements and contributions to the nation … and bestowed a knighthood on Prince Philip, a one-man-argument for a republic.

Liz said, “Huh.”  Then she had breakfast and a cup of tea and checked again, and it was still not a joke.

What’s beautiful about Abbott’s choice is how Australians from all walks of life, across the spectrum of political beliefs and personal backgrounds, have come together to say as one: “What?”  And on such a divisive and fraught day as the anniversary of the European invasion and commencement of attempted genocide, that is a great thing.  Deserving, you might even say, of a knighthood.

On the other hand, it’s a bit of a joke, right?

Accordingly, No Award brings you a short list of people at least as deserving of knighthoods as Sir Mr The Queen: 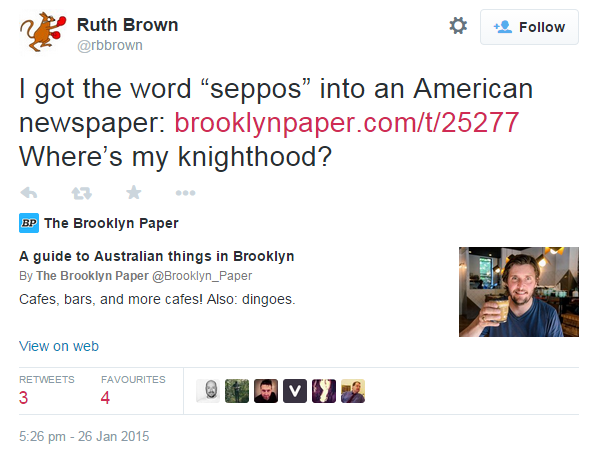 People even less deserving of knighthoods than Prince Philip

Important and relevant to the interests of No Award: at Spoonflower, an Australian cities design contest. There’s some racist poo in there, but mostly it’s hilarious fun.

At the Guardian, on Boko Haram.

You can submit poetry at The Lifted Brow!

A teaser at Kill Your Darlings, about the absence of cricket in national literature.

This Stormtrooper was saved from a deadly snake bite by his Storm trooper armour. #straya

And multiple Australian men have been arrested for driving motorised eskies.  #heroes

The Medicare rebate slash we better not have: Latika Bourke at the Guardian; Sophie Scott at the ABC.

Official No Award stance: Do not sing the National Anthem on Invasion Day (known legally as Australia Day).  Can you even. This is beyond even the cultural cringe. (Steph had a moment when she first opened that article where she thought ‘NADC’ said ‘NAIDOC’ and she was like WHY WOULD NAIDOC SUPPORT THIS. Don’t worry. She was wrong.) And a thing at En Passant.

The horror of a pineapple of clowns descending upon Sydney.

‘Indigenous Australian’ was one of the most read Wiki pages of 2014.

Language Tips for Cis Feminists Speaking on Trans Issues: Liz very much wishes she had read this before doing the Ancillary Justice post, and unreservedly apologises to anyone she offended.

NASA has released the world’s largest photograph, a high-definition panoramic view of the Andromeda Galaxy.  Warning: may trigger existentialist crisis.

The other Chinese favorite, perhaps less expected, has been The Merchant of Venice, which debuted as a silent film in Shanghai in 1927. Called The Woman Lawyer, the film highlighted what has particularly interested Chinese audiences about the play, even up to the present: its proto-feminist heroine Portia, who dresses as a man and brilliantly defends Antonio in a gripping courtroom drama. That scene later became, and still remains, a staple of the Chinese middle school curriculum. The Western focus on Jewish-Christian relations means little to Chinese audiences compared with the way that Shakespeare dramatizes a classic battle of Confucian ethics, between li (profit motive) and yi (loyalty to friends).

(Liz would argue against the suggestion that China is unique in using Shakespeare to advance its ideology!  But it’s an interesting article nonetheless.)

The free market won’t stop climate change, but its failure is inspiring the people who will. A comic at by Sam Wallman at The Nib.

Steph’s post from last week on Appropriation and Racism in Melbourne Restaurants has been linked eleven trillion times, so you should definitely read that. There will be a follow-up post eventually to tell you all the restaurants she has been told about following that.

Cranky Ladies of History, featuring fiction by Liz and Steph, is up on GoodReads!  It’s not available for pre-order yet, but keep an eye out.

An entire building inspired by Lee Lin Chin and her fashions

Portraits of Larry Emdur circa The Price is Right

Kamahl, illustrated with quotes from his songs

Red Hot Rhonda Burchmore and the Channel 9 Dancers; this would be an interactive exhibition in order to properly appreciate her legs

The Gladiators; called ‘Gladiator Ready: the journey of a nation’, and paired with a special mini-exhibition devoted to referee Mike Whitney and Who Dares Wins

Play School; includes an ode to Noni Hazlehurst’s potty mouth, and speculation on the absence of Diddle the Cat.

Failed Christmas Decorations That Narrowly Ate Loved Ones: inspiration from back issues of The Australian’s Women’s Weekly and Better Homes and Gardens

Tomorrow When the War: racist art of Australia edited to be less racist and/or feature giant Australian fauna

Waiting Game: lots of different clocks illustrating how late trains in Australia are.

with thanks to Hayley Inch for inspiring and “assisting”