In fact, why don’t you watch this video for 2 minutes before we start this post. No Award and the Friends of No Award have watched this several times and cried with laughter every time.

This post was mostly inspired by Mad Max fandom. What Steph loves the very most about Mad Max fandom is that it’s full of grumpy Australians being really grumpy about non-Australians (mostly Americans) Getting Things Wrong. Steph is one of these Australians, all get off my lawn and get out of my car, and definitely get out of my town of 2 million people that doesn’t have a Starbucks. She’s a little bit obsessed with an epic coffee shop AU set in a small town in Australia. It has a Starbucks and a piano bar but no pub. NO PUB. Not gonna link the AU because it’s not about making fun of fanfic, it’s about making fun of Americans in general, and revelling in our own ridiculousness.

And so, for the humour and wtf of all Australians, we present:

A Pub With No Beer: Australian slang that foreigners* misuse

The actual use: Ranga OR Boomerang

The sitrep: American comics in the 70s, 80s, and 90s all used ‘rang’ to mean boomerang or batarang. Spoilers, that is not what this means. To call someone ‘a ranga’ is to compare their red hair to that of an orang-utan, and it is a fucken insult and you had better fucken not use it.

No Award will not be entering into arguments about whether it’s possible to be racist against white people with red hair, what is this, amateur hour?

The misuse: anything that’s not ‘fuck’ when you could be saying fuck

The actual use: Fuck. Just fucking (or farken or fucken) all over the place.

The sitrep: It’s just kind of an adjective, okay? You can also use bloody, if you want, but that’s a bit old school. A typical sentence from Steph: “It’s pretty fucking obvious that this fucking book was written by a fucker.” It doesn’t necessarily convey strong emotions, but it can.

Speaking of “bloody”, back in 2013, Liz had the edifying experience of watching an American Yanksplain to a British person that “bloody” is as offensive as “fuck” and would never, ever be used by or in front of a child.

The misuse: Fanny to mean arse/buttocks

The actual use: Arse; Clacker; Bum.

The sitrep: Fanny means – well, if you’re in primary school, front bottom. I think you can extrapolate from that.

The misuse: “This thong is riding up my arse”, “My flip-flops are flip-flopping around.”

The actual use: g-string or thongs

The sitrep: your g-string rides up your arse; your thongs go on your feet. Ain’t nobody wearing flip-flops here, and a thong on your arse probably means some kind of punishment.  Or sex. Or that the sand at the beach is really hot and you forgot your towel.

The misuse: “I have to go to the bathroom.”

The actual use: “I gotta use the dunny” or, if very polite company, the loo.

The sitrep: Why would you pee in a public bathroom, that means there’s showers and shit.

The actual use: Jumper

The sitrep: It’s winter. We’re all wearing jumpers, Quokkas. And it’s definitely not some sort of one-piece jumpsuit or whatever (oh wow, Steph just got that).

The misuse: “I’m rooting for the Bombers” “I need to root around in the drawer for a thing.

The actual use: You’re barracking, or you’re searching.

The sitrep: Mate, if you’re rooting for the Bombers, you’re basically lying back and thinking of England.

The actual use: “You fucking buggered it up.”

The sitrep: It’s not a homophobic slur, I promise. It’s just about making a fucking arse of yourself.

The misuse: Anything that implies there’s not a pub in a country town.

The actual use: Pub. Pubs everywhere.

The sitrep: The thing that struck me about this world-building, the thing that stuck out more than the Starbucks in this country town, the thing that made me shriek and slam my hand against the table, is the lack of a pub. The town as described has a fire station (though fails to mention the CFA), a little school, and a “Provisions,” which, it’d be an IGA but let’s not quibble. But it hasn’t got a pub, and if you think a town would have more than one street but no pub, well. Mate. (It should also have a church tbh, but that’s neither here nor there).

The misuse: The idea that ‘dag’ is derived from Scandinavian and means day. (Thanks, MMFR fandom.)

The actual use: Dag

The sitrep: This is probably my favourite part of MMFR canon. Here, from urban dictionary:

A dag is technically the matted wool on a sheep’s tail, but in typical usage throughout Australia, it refers to people who don’t have a neat, tidy or cultured appearance. It can also refer to a person who tends to be quite informal.

It is not an intrinsically derogatory term in modern useage, no matter what Wikipedia says.

I’m a bit of a dag today, I’m wearing my trackie-daks

Yes, The Dag. Love you and your furious vexation.

The actual use: If he’s got a lot of swag, he’s got a bag with some stuff in it, including sleeping gear.

(YOU’LL NEVER TAKE ME ALIVE, CRIED HE, flipper over heart)

The misuse: to even think the word ‘hookie’

The actual use: wag

The misuse: Yes. No.

The sitrep: Just don’t use it. You’ll probs get it wrong.

The actual use: AUTUMN

The sitrep: Mate, if it’s fall, that means something terrible has happened

The actual use: cheque or bill or BPay

The sitrep: Things aren’t paid here by cheque, not really. You can’t leave cheques unpaid. They’re bills, and you pay them using BPay or at your local Australia Post. Wages are paid via direct credit. If you’re in a restaurant, you’re getting the bill.

The actual use: “I lost us the trivia night, and she’s so angry, she’s mad as a cut snake.”

The sitrep: Imagine you cut a snake. Now imagine how angry that snake is.  (See also “mad as a frog in a sock,” used correctly by Hugh Jackman in Chappie.)

The misuse: “I need a coffee. Where’s the nearest Starbucks?”

The actual use: OH MY GOD LET’S TALK ABOUT COFFEE

The sitrep: So Australia is the only country where Starbucks nearly went out of business and had to downsize. Starbucks is so unsuccessful that there aren’t any at all in Perth, a city with 1.83 MILLION PEOPLE. A city with almost 2 million people and it doesn’t have a Starbucks, because Starbucks can’t get a foothold in Steph’s hometown.

Just to put that in perspective for Steph’s favourite coffee shop AU, which suggests there’s a Starbucks in a town so small it don’t have a fucking pub.

Some of the reasons why Starbucks can’t get a hold in Australia are to do with the Australian relationship with coffee. The only time Aussies say yes to coffee with no qualifiers is when they’re on a plane (and they’re not happy about it). Otherwise, every coffee drinking Australian knows their coffee order and its acronym, even if it’s just a long black (lb) or a short black (sb). Stephanie and Liz both drink a soy flat white (soy flat).

Nobody calls it joe, ain’t nobody using  filter coffee. You’ve never got a new pot on that you have to wait for, unless you’re boiling the kettle to make something using instant. And nobody is going to pay for instant, but if you’re in the office or at a conference and can’t be bovvered heading out of the building, then you’ll probs drink it.

It’s called an espresso machine. It makes espressos and everything else our little Australian hearts desire.

The actual use: Bunnings

(Liz would like to make it clear that she has never heard the term “traino” in her life, and is pretty sure Steph made it up on the spot.  But she, too, endorses the West Footscray Bunnings.)

(EXCUSE STEPH whilst she makes a survey to prove Liz wrong. Next thing Liz is going to say she never heard of bottleo or servo, either.)

The sitrep: Straya has some of the best beaches on the planet, ain’t no fucker going into the ocean in a bloody swimsuit. They’re your togs. Or bathers, or cossie, or swimmers. Regional differences abound.

For further local hilars, please go through the timeline of @ottomanscribe who was on a fucking roll yesterday: 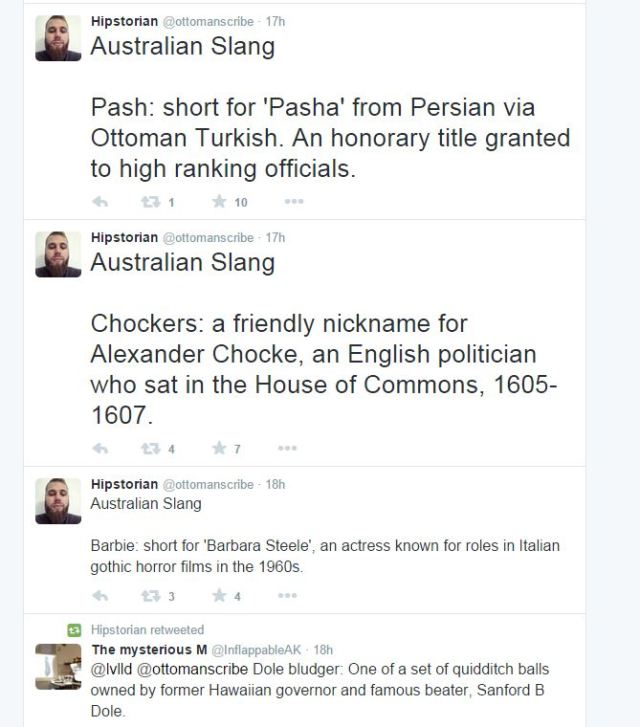 25 thoughts on “A Pub With No Beer: Australian slang that foreigners* misuse”