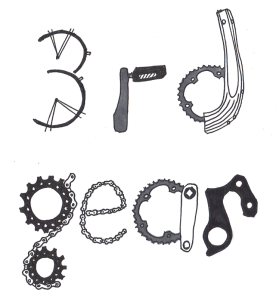 You can purchase the first issue of intersectional feminist zine 3rd Gear! Edited by BFF of No Award Danni, and featuring a contribution from Steph! And also an excellent assortment of advice, philosophy, and practicality. Buy 3rd Gear online, or locally from Sticky Institute.

In other bike news, I made a denim pouch for aforementioned BFF of No Award Danni. This denim pouch was made out of a pair of Danni’s old jeans (being a cyclist, she goes through jeans very quickly). It’s perfect for cycling in a dress, going to festivals without a bag, and generally looking cool. I’m so chuffed with how this pouch turned out, and it was really simple. Liz is insisting I tell you how to do it, and so:

A little jeans pouch how to 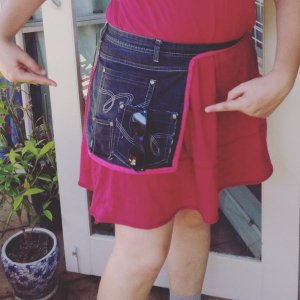 Pick a butt panel. This will form the foundation of the pouch. Cut out the approximate size and shape of the pouch panel, as well as up and along the waistband. Keep the waistband intact, as this is how the pouch attaches (via the button, like a usual pair of jeans). Cut as close to the double seam as you can, as this will minimise your need for hemming, and minimise the fraying. Carefully cut between the top of the zip and the waistband.

From the discarded bits, cut out whole pockets – that is, not the hip pockets, but coin and other butt pocket. Sew these onto the pouch panel. You can choose between cutting off the pockets, or cutting out the pockets (ie, including the internal denim). For strength, I included the entire pocket.

TIPS FOR TRIMMING: Trimming is pretty easy, it’s just the addition of stuff to your hems and borders. You can trim with a variety of techniques and materials, but for this I simply wanted to make the edges neat so I used extra wide bias tape and a running stitch through the thickness of the denim. Trimming has the advantage of acting as a form of hemming, meaning I didn’t have to hem any of the denim I had cut, particularly around the curve of the pouch (ie the butt panel). Lace and ruffles would also work excellently as trim on this pouch. You can skip the trimming if it doesn’t take your fancy, if you’d rather go for a plainer pouch – in which case, just make sure to hem the butt panel part.

No Award says no to yarn bombing.  It’s a waste of yarn, potentially damaging to trees (we keep hearing different things on this, so it may depend on the tree), interferes with things that live in trees, renders mobility and accessibility aids useless or difficult to use, and if it’s not hideously ugly to start with, it will be by the time the yarn goes mouldy.

Literally the only yarnbomb I’ve ever seen that I didn’t detest was small and subtle — tiny red crocheted flowers loosely tied around the branches of a naked tree in winter.

“But it’s so clever and subversive!”

No, it’s just a mould that accompanies gentrification.  It’s about as subversive as Banksy or Julian Assange.  Yarnbombing is to underground art as manic pixie dream girls are to well-written female characters.

Luckily, the argument that yarnbombing is in any way underground, clever or subversive has just gone out the window.

Is that a guy in a hi-vis vest applying machine-made crochet* to a tram stop?

I was going to put on my Intrepid Journalist hat and investigate the tram stops in person on my lunch break, before conducting an in-depth interview with a sweet potato with cheese bacon and onion for Liz’s Lunch Magazine.  But I had a lot of errands to run, so I just stayed at my desk and used Twitter.

* We assume it’s machine-crochet.  Though Official Potato Moya notes, “the idea of Yarra Trams having, like, a back room full of bearded hipsters knitting quietly away at their yarnbombing, being paid in lattes, that’s kind of delightful”.

In conclusion, use your knitting powers for good instead of gross wet wool evil and find out which charities accept donations of blankets.

The ABC brings us an important fatberg update from Brisbane.  (Maybe not safe to read if you’re eating.  A key quote: “We always get corn.”)

The Breakfast Clubbing Season – In which an intrepid ABC editor inserted talking ex-prime ministerial heads into the trailer for The Breakfast Club.  Many thanks to Friend of No Award Sarah B for bringing this to our attention.

Why Grandma’s Sad, tales from the olds who need youths to get off their lawn, pay attention to grandparents, prioritise boring adults, etc etc. Steph laughed her way through this whole thing, it’s so great.

Kids spend an enormous amount of time looking at a type of device that didn’t really exist ten years ago. Among some young people, looking at these devices is the central animating activity. This is weird. Truly! Younger people are cyborgs and older people are meat, more or less.

At The Conversation: Coles: Not So Good For Humanity, Particularly If You’re A Truck Driver. We’re not saying Steph spent her birthday phonecall from her sister lecturing her sister about not going to Coles for strawberries, but Stephanie has long-term frowned at Australia’s supermarket duopoly (whilst occasionally still using it).

WA, no: WA’s Department of Culture and Arts under fire for ‘turning hoses’ on homeless.

This post was great: Why I’m Done Defending Women’s Sports.

While I’m being asked why “no one cares,” the Women’s World Cup is getting ratings that would make the NBA or Major League Baseball weep with joy. While ESPN Radio self-parody Colin Cowherd says that men are stronger and better athletes and we appreciate greatness in America and that’s why men’s sports is more fun to watch, his radio contract appears in peril because fewer and fewer people care what he has to say.

Steph loves Mount Zero Olive Oil, she can buy it in bulk (pouring it directly into her oil bottles) from Friends of the Earth and it tastes lovely and it’s from Victoria. But I probably wasn’t this thief. Thieves steal almost 600 litres of extra virgin olive oil from Grampians grove Mount Zero Olives.

Plastic Free July update: Steph almost had a meltdown in the aisles of Minh Phat in Richmond, when she realised her choices were the following, as a Chinese-Malaysian in Australia:

Reader, she bought her oyster mushrooms grown in Victoria, wrapped in plastic and on a polystyrene board; she bought her noodles fresh made and wrapped in a plastic bag. She is going to make tofu tonight at home, so at least she has that. Anyway, cultural elements of Western society concepts that are about individualism and clash with other things, etc etc.

On a related note, here is Naomi Klein talking about the western emphasis on individual action as a vehicle for change, versus the collectivist perspective of sweatshop workers in developing countries.

You see, for him and his colleagues, individual consumption wasn’t considered to be in the realm of politics at all. Power rested not in what you did as one person, but what you did as many people, as one part of a large, organized, and focused movement. For him, this meant organizing workers to go on strike for better conditions, and eventually it meant winning the right to unionize. What you ate for lunch or happened to be wearing was of absolutely no concern whatsoever.

Finally, Melbourne is about to enter a cold snap, so here’s a pattern for a penguin hot water bottle cover.  Stay warm!

On Easter Saturday morning, I impulse purchased a sewing machine.  From Ikea.  Not only does Ikea sell sewing machines, but they’re cheap enough (AU$79) to be an impulse purchase.  Amazingly, it even seems to be a good machine — or at least, easily equal to the Singer machines I used in high school.  I understand that technology has marched on, and sewing machines now come with inbuilt computers and USB ports — why? I have no idea! Give me time, though.  I’ll figure this out — but this just goes forward and backwards in a variety of stitches.  It’s small, but solid, and the interior parts don’t look flimsy.

So now I am (re)learning to sew.  In the past, I’d mess up a pattern and decide on the spot that sewing clothing was not for me.  WELL, THOSE DAYS ARE GONE.  (I mean, I have a job, now, and if I stuff up, I can buy more fabric and try again.)  At this stage I’ve done a gathered skirt and a loose, drapey top.  Both are basically rectangles sewn together.  BABY STEPS.

Naturally, I’ve also been looking at a lot of online fabric stores.  (This is also because I like to have something pretty to look at while I’m transcribing stuff, and for some reason my employer has blocked Asos and Etsy.)  And I have learnt, to my complete lack of surprise, that a lot of fabric prints are … well, problematic.  Grotesquely racist is another frequently applicable term.

I’m not at all surprised by this because crafting communities, in general, are dominated by middle-aged, middle-class women who think golliwogs are hilarious.  I’m told that the golliwog thing is less widespread outside of
Australia, but the general ignorance remains.  So I’ve decided to do a series of posts about some of the particularly vexing fabrics that have crossed my path.

This is from Alexander Henry’s Folklorico collection, which is basically stereotypical Mexican iconography on fabric.  The whole collection is deserving of side-eye, but I’ve chosen to discuss the Virgin of Guadalupe because I actually know something about it.

BASICALLY, in 1531, the Virgin Mary appeared to an indigenous Mexican man, addressed him in his language, and told him to build a church on the site of her appearance.  There followed a series of miracles, culminating in the appearance of this image on the man’s cloak.

Now, this is notable because, while the Catholic church, like most major European institutions of the 16th century, was heavily into colonialism, this was the first time a significant religious figure had appeared to one of the colonised peoples, not to mention speaking in his own language.  And certain aspects of indigenous dress were incorporated into the miraculous image.  It’s kind of like Mary was saying, “Yup, we’re all united.”

…okay, or there is that longstanding tradition of Catholicism just absorbing the local culture wherever it went, and various pagan figures sneaking into the mainstream religion under cover of being totes Christian, honest.  (Suffice to say, a surprising number of Irish “saints” were actually local deities.)

Either way, this image represents a really complex mixture of colonialism, imperialism, cultural genocide and cultural exchange.  It is not, in my opinion, something to be made into a cushion cover or whatever.  (I should say, I am generally not okay with wearing or displaying the iconography of a religion you don’t practice.  When I was 15 I wore a silver Buddha pendant, because no one told me not to, but that was a long time ago, and I’m pretty embarrassed about it now.)

But there is one other good reason to think twice before you make that Guadalupe quilt.  The belt worn in the original image was worn by Mexican women when they were pregnant.  This is, therefore, one of the surprisingly few depictions of Mary as a pregnant woman.  And that means that the image has also been adopted by Catholic pro-life movements.

Now, my mum’s been a pro-life activist since before I was born, so I don’t automatically recoil from the concept.  But I also don’t plan to go around wearing a Virgin of Guadalupe sundress.  It’s a bit like the language of flowers — the message is only significant to a tiny number of people, but nevertheless, is it really a message you want to be sending?