ANYWAY, we’re not talking about that today because Steph will start yelling at work and is already really stressed. Instead: MULTICULTURAL THOMAS THE TANK ENGINE.

END_OF_DOCUMENT_TOKEN_TO_BE_REPLACED

This time on Birds of Australia with Hayley and Michael: The Tawny Frogmouth

END_OF_DOCUMENT_TOKEN_TO_BE_REPLACED

A NOTE FROM LIZ:

I have broken my foot!  Which means, alas, that I’m not going to Brisbane — while I’m cleared to fly, it’s a struggle just to get around my little flat. I’m pretty devastated, but FEAR NOT, No Award fans, Stephanie will be at Contact, probably shouting about racism and climate change (I assume).

Gorge on the saturated irony content of this argument: obesity disproportionately affects the poor. The poor have just been made even poorer, therefore will soon be more obese. Therefore taxing their consumption is an even more logical step.

Liz is currently reading Niki Savva’s The Road To Ruin, the infamous book on the Abbott-Credlin team that includes such media-friendly highlights as that time Credlin fed Abbott from her fork, and that other time Abbott slapped her on the bum, and also they were just really terrible to work with.

Less media-friendly, but more interesting to me, is how it demonstrates that there’s a strong culture of bullying in the Liberal Party, particularly in its right wing. So I’m not particularly surprised to find Cory Bernardi sending emails like this to a constituent who objected to his rampant homo- and transphobia.

Put Fat Girls in Your SFF YA

Books are supposed to help us dream and dream big but you’re starting to feel like you’re just too big to dream. You’ve read a couple books where fat girls get to be loved in the real world, and that’s wonderful, but fat girls don’t get whisked away into alternate worlds and told they’re a long lost princess. Fat girls don’t get to see the magical underside of New York City. Fat girls don’t save planets.

I appreciate good art direction just as much as anyone else, and I see that Cuba looks like a beautifully destroyed photo op. But it’s not your photo op. The old cars are not kitschy; they are not a choice. It’s all they have.

Disgusting as anything: Police officer who dropped Ms Dhu on concrete floor thought she was “acting”

The Safe Schools Debate reminds LGBT Australians of when our childhood bullying was ignored.

Let’s consider another reading: here is a powerful group carefully but ferociously dismantling something of significance to vulnerable people. This is the behaviour of bullies.

‘Making mistakes with people’s lives’: the ethics of orphanages and voluntourism

Previously on decolonising our weather: hello and welcome to spring (not spring), a look at seasons defined by Traditional Owners in Perth (Nyoongar) and over East (Kulin and Wurundjeri).

This week on decolonising our weather: how to read what the BoM is telling you, rather than saying to me ‘wow, it’s hot for Autumn, isn’t it?’ Mate, it’s still March, we had a late warm spell, it’s not even Waring Wombats Season, what more do you want.

END_OF_DOCUMENT_TOKEN_TO_BE_REPLACED

Lately, No Award has been watching Empress of China, a 2014-15 serial about the life of Wu Zeitan, the titular empress. Fan Bing Bing is both star and producer, and we love her quite a lot.

END_OF_DOCUMENT_TOKEN_TO_BE_REPLACED

Steph has taken advantage of having a blog to interview her friend Vidya, who has a show, Asian Ghost-ery Store, starting this very week at Melbourne International Comedy Festival.

So today Steph and Vidya talk talcum powder, ambiguity, ghosts, and the comfort of the Asian grocery store.

Raised in the aisles of Asian grocery stores, time has come for Shan and Yaya to escape — and haunt modern Australia. But how do a couple of ghosts conjure a stylish, post-racial image while stuffing their faces with Hello Panda? Shannan Lim and Vidya Rajan glide you through a late-night trolley ride of story, performance, sketch and meandering rumination. Part truthful, part ball of lies, Asian Ghost-ery Store is an exorcism — a dark yet gleeful shopping spree of their shared consciousness.

END_OF_DOCUMENT_TOKEN_TO_BE_REPLACED

Not Your Korean Sidekick: The Frustrating Career of John Cho

(This post really speaks to Liz, because I spent much of my teen years with hair to my waist, attempting to reproduce Captain Janeway’s buns. Speaking of things that need mythbusting — or are we meant to believe Janeway was wasting replicator credits on hairpieces? THERE’S COFFEE IN THAT HAIRDO.)

Steph is an aspiring futurist (you might have guessed), and is super intrigued this interview at Business Insider with Ford’s futurist, who is a WOMAN YAY. (It’s a total con, don’t get me wrong, but some of the predictions are super interesting. Self-driving cars because of aging Boomers? Car sharing investment by car companies because it’s in their best interests not to create a grid-lock universe? TELL ME MORE.)

Trove and the case for radical openness #fundTrove

The agents of racism

East is eden: the Hollywood hits heading for a Chinese remake – in pictures

We are 100% going to watch the Mandarin remake of The Devil Wears Prada when it comes out. (And is subbed, in Liz’s case.)

(To save everyone the trouble: Not All White Cis Gay Men.)

(Steph went to the National Steam Centre instead of Kyneton; she has this celebrity crush business UNDER CONTROL)

END_OF_DOCUMENT_TOKEN_TO_BE_REPLACED 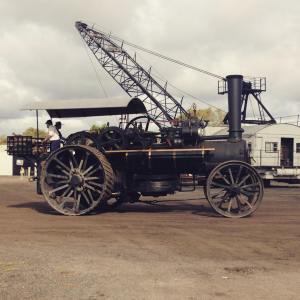 A bazillion festivals and fairs on the weekend, and the one I chose was the Scoresby Steamfest, held at the National Steam Centre in Scoresby.

END_OF_DOCUMENT_TOKEN_TO_BE_REPLACED

Blaq Carrie is one of my favourite women of Oz hip hop, and this has been my jam for a few months.  She dropped a new mixtape last month; it’s pretty great.