Ms Genevieve wrote a red carpet rundown about the 2015 Met Gala, and it’s great and you should read it (she has many excellent photos of excellent Chinese women there being fierce). Usually her rundowns are sufficient for me and I don’t need to talk further, but this year’s theme was “China Through the Looking Glass,” and I don’t think it will surprise you to know that I have opinions that need to be discussed in depth.

First of all, if you didn’t already know about Guo Pei, feast your eyes upon her beloved, amazing work. She is China’s premier haute couture designer. She is stunning and talented and I would probably kill a white man for the chance to wear some of her designs. Sometimes when I’m putting together outfits I’m picturing her 2010 One Thousand and Two Arabian Nights Collection in my head as I do it. We should all aspire to One Thousand and Two Arabian Nights. 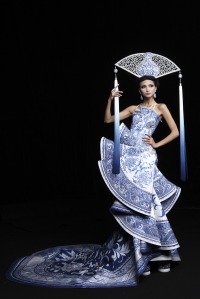 In an interview with Maosuit in 2012, Guo Pei noted:

Given that atrocity, I’m super glad that Rihanna chose to wear her, and that now lots of people around the world are looking into her work. That’s great! That’s a great outcome from the Met Gala and the theme. What a shame an amazing Chinese couturier can’t get a leg up in the Western fashion world.

(Incidentally, in 2010 she was compared to Charles James, and the NYT suggested she had in fact surpassed Paris designers.)

Opium is so fraught in China, particularly in regards to China’s history with Britain and various other Allies. The two Opium Wars occurred due to the colonialist need of Britain and other European countries to force their substandard manufacturing upon China in the 1800s. The history of opium in China is so fraught that an official delegation from the UK in 2010, that included PM David Cameron, was asked not to wear poppies for Remembrance Day because they were a “symbol of China’s humiliation at the hands of Europe.” And then they wore them anyway. (Of course they did)

I guess it shouldn’t surprise us then that, given fashion’s great history of cultural delicacy, a number of people wore dresses (or, in the case of Cara Delevingne, fake tattoos) covered in poppies. To be fair, it’s hardly their fault; an email from Vogue Social Editor Chloe Malle about the theme for China: Through the Looking Glass” mentioned that the official dress code was “China White Tie” and she wasn’t sure how people would interpret that. “China white” is at times a slang name for a type of opiate. So it’s subtle, obviously, and not at all a continuing demonstration of the cultural imperialism of the West. Not at all. 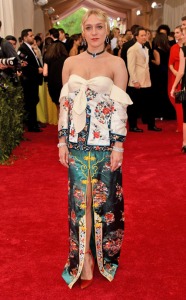 And beyond poppies. Here’s the thing about Chloe Sevigny’s dress: each individual component is fine, and can be linked to a specific period in Chinese fashion history, for the most part (that front slit is a choice, I guess). Each of these eras of history had some amazing fashion! Why, then, one would choose to combine eleven trillion dynasties into one outfit is astounding.

The top is clearly half a top. Please witness our Lady of Delight Fan Bing Bing in The Empress of China for an example. 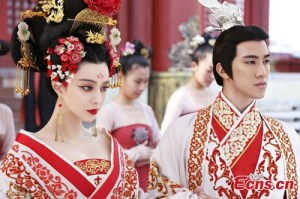 The bottom of Chloe’s dress is clearly attempting to be a cheongsam. Its variations don’t usually include a front slit. It’s not out of the realms of possibility, except that under layer clearly demonstrates it’s a side slit. The under layer is also overly long – traditionally the petticoat is only to above the knee. See one of my favourite ads from the 30s: 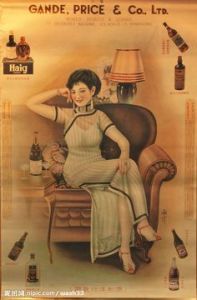 (Don’t do cigarettes, kids) This outfit is see-through and yet entirely still accurate. It’s fitted correctly. Its slit is to the thigh but on the side. It’s tight but moves. You can see the hit of petticoat under there.

And Chloe’s biggest issue is the fit. Cheongsams are exactly tailored, and to wear one that is so long it’s crinkling unattractively on the feet is not really on. And the wrinkles. Cheongsams are kind of hard to wear, why bother wearing one if you’re not going to wear it properly?

Speaking of Our Lady of Beauty and The Most Money of Anyone Else in Chinese Media (she is currently the highest paid actress in the world):

Christopher Bu often dresses Fan Bing Bing. Would that he dressed all of us, but we wouldn’t be able to do him justice. Specifically I want to note him because he does some of my favourite work with combining traditional elements of Chinese fashion and design with more modern (read: Western) elements, and I adore his embroidery work. You should also be checking out his stuff. 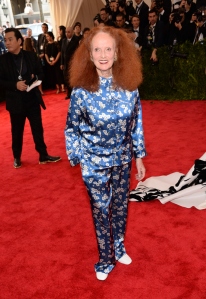 A note about pyjamas:

Pyjamas make you a Shanghai Auntie, and they’re not the greatest way to evoke China. However what they are is a great joke, because a) everybody has a pair, and b) in 2010, before the World Expo, the Chinese government worked hard to eradicate public pyjama wearing across Shanghai.

Pyjamas were endorsed by Deng Xiao Ping during Opening Up, and became a fashion statement adopted from the West. It was a nice way to imitate the West, which was a big part of Opening Up. Pyjamas were also a matter of convenience – in tiny state housing, why change to dash across the road? Wear your pyjamas. So in terms of attention to theme and weird imperialistic thievery that leads to inappropriate use, this is actually incredibly on point!

And now they’re being worn to the Met! So actually anyone can wear their pyjamas. I endorse it.

You may notice I’ve only mentioned two Chinese designers here! That’s because there weren’t really that many.

Names such as Guo Pei, Christopher Bu and Bao Bao Wan may not trip off the tongue just yet, but they are the vanguard of a new invasion of Chinese fashion designers who don’t resort to the detailing of Chinese traditional dress.

And even the Guardian, which has an article asking where all the Chinese designers were, managed to make it awkward and othering, which makes everyone want to find out more about Chinese designers! Because even as they’re awesome, they’re still exotic, I guess.

(The quote above, incidentally, fails to note that these designers still do amazing traditional detailing, and Bu is known for it.)

5 thoughts on “China Through the Looking Glass”