Infini was written and directed by an Australian, features an all-Australian cast, and was filmed in Australia.  It should rocket straight to the top of the No Award List Of Things We Really Like. 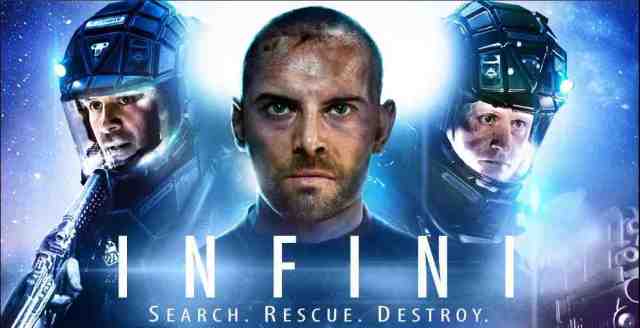 If only that were true.

The all-Aussie cast are doing American accents — except one guy who I think is meant to be British, but he sounds like an American actor trying for Aussie — and it’s just a tedious fest of rehashed Star Trek plots mixed with manpain.

Now, I don’t mind a bit of rehashed Trek.  Serve it up with some shiny low-budget effects and local accents, I’d have eaten it up with a spoon.  (And then whinged here about the dude-heaviness of the whole thing, but that’s half the fun!)  But setting it in the US is just … lazy.  Everyone has seen this before.  Why not change it up a bit?  (Answer: the accountant was in charge.)

Similarly, the casting is just woefully dull.  Of the fourteen cast members — that includes bit players — ten are men, and nine of those are white men.  I’m not great at distinguishing faces, so I knew them as Lead Guy (aka The Dancing With The Stars Host), The Other Other Hemsworth (turns out there are three!), Beardy McBeardsalot (aka Guy From Animal Kingdom), REX MANNING (that was his character’s name — I could recognise him because people kept saying it in allcaps), Is He English Or What?, The One With Dark Hair, and The Rest.

(I should note that Kevin Copeland, The One Guy Who Isn’t White, is in fact American.  He does a lot of Australian stuff, though.  I totally forgot he wasn’t One Of Us.)

One of the film’s four women is a bit player.  The remaining three are:

Claire is played by the beautiful and underrated Grace Huang, so that’s two non-white people in the cast.  There’s a moment where, as she goes mad from PLOT REASONS and also Abortion Angst, she says goodbye to her mother in Mandarin, and that’s the closest we come to further character development for her.

Not that the men fare any better.  These characters are strictly cardboard cut-outs.  Lead Guy bonds with Is He English Or What? over fatherhood, and has high level manpain because What If He Dies?  REX MANNING shouts and shoots things.

There’s quality dialogue like, “I’M TALKING TO MY FUCKING KIDS, MOTHERFUCKER!”  The final act is basically just guys screaming at each other, while I texted Stephanie to ask if I had to keep watching.  She said yes, which I’m pretty sure is a human rights violation.

The highlight, for me, was the repeated shots of Sinister Wind Farms On An Alien Planet.  A lot of the dialogue was mumbled, so I’m not sure why they were sinister, but there they were.  Wind farming.  Ominously.  Maybe Going Crazy In An Isolated Facility On An Alien Planet is one of the symptoms of Wind Turbine Syndrome?  I made a joke on Twitter about this being what it takes to get an arts grant these days, but it turns out Infini received no taxpayer funding.  Thank heavens.

Oh, and the plot — a mining operation on a distant planet turns out to be digging up an alien life form, and it’s maaaaaaaaad.  Star Trek did it with “The Devil in the Dark” (TOS) and “Home Soil” (TNG); Doctor Who did it with “42” and, like, every third Pertwee serial.  This is entirely skippable.

Infini was released direct to iTunes and maybe other video on demand sources, who knows?  Liz paid AU$6.99 to rent a HD copy of Infini from iTunes and kind of wants her money and her two hours back.

2 thoughts on “In space, no one can hear you have manpain”