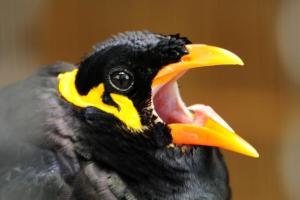 Unexpectedly controversial this month, with Hayley and Michael challenged by Steph to take on both the common (Indian) myna and the noisy miner.

This month Steph has given us two of the most problematic birds in Australia – the invasive common (or Indian) myna and the native noisy miner. Despite the similar names, behaviours and physical appearance, these birds aren’t related at all – the miner is an Australian honeyeater, while the myna is more closely related to starlings. Both thrive in urban and suburban settings, benefiting particularly from city parks made up of tallish trees and little or no ground cover and both have reputations as utter, utter jerks.

Let’s start with the common myna – an easy bird to dislike. It’s non-native, aggressive, has a grating call and is one of the biggest threats to native bird species in Australia (and one of just three birds in the International Union for Conservation of Nature’s highly competitive world’s 100 worst invasive species list). They’re often observed in urban areas dominating nesting hollows, kicking out native bird and mammal species and killing nestlings. Their presence here is once again a tribute to the ridiculousness of early white Australia, with a release in Melbourne in the mid-1800s seemingly just for kicks and a further release in North Queensland as one of the myriad failed attempts to control insects in the cane fields. Nice work everyone. They’re now established all along the East coast of Australia, particularly in cities and towns. They thrive alongside humans, and can establish populations very quickly – the density of birds in Canberra increased five-fold from 15 birds per square kilometre to 75 in just three years between 1991 and 1994 (the vaguely militaristic Canberra Indian Myna Action Group have since stemmed the tide somewhat).

Despite all of this, the evidence that mynas are actually a major threat to native species is pretty sketchy, and the enthusiasm for mass culling seems at best misguided. This doesn’t make them any more likeable, but tempers my distaste a little.

The noisy miner is seemingly more complex – they’re native honeyeaters, whose historical range runs from Adelaide, right around the coastline to Far North Queensland. This range has remained pretty stable over the years, but the density of the birds has exploded within the range, particularly as land is cleared and cities and towns spread. Noisy miners form obnoxious little gangs in their preferred habitats and aggressively drive out other small birds in vicious squabbles over turf.

Just last week, the keynote presentation at the Australian Ornithological Conference outlined the devastating impacts that noisy miners can have on other species, and there’s increasing evidence that miners are a much bigger problem than the more maligned mynas. An established population of noisy miners quickly leads to a collapse in the population of almost all other local birds – other honeyeaters, wrens, pardalotes, thornbills – basically anything smaller than a myna is driven away by these marauding hoodlums. In spite of all this, the general public is still much, much more concerned by the common myna – voting it the most unpopular invasive species in Australia.

So, in a typically Australian way, we’ve got politicians and the media calling for increasingly vicious reprisals against a migrant group despite little evidence of any real problems associated with them, while cocky gangs of local hooligans get off scot-free despite decades of ruthless bullying.

I do not ordinarily condone irrational hatred of animals. It tends to bring out the worst in human tendencies towards anthropomorphism, and often the animal in question has been unfairly maligned by misinformation or sheer human stupidity. But I will never get over my EXTREMELY JUSTIFIED HATRED of common mynas. They’re RUBBISH.

We can probably blame my dad for planting the seed of myna hatred, given he also hates them due to their invasive ways and the fact they muscle native birds out of any territory they happen upon. He was always coming up with schemes to mass eradicate mynas and would lament that he didn’t have any contacts at the CSIRO in order to put these plans into action. An ordinarily nature-loving fellow who likes all animals continues to hold no love for these birds – THEIR PERFIDY CLEARLY KNOWS NO BOUNDS.

Common mynas aren’t just pests in Australia, either. New Zealand, South Africa, the Middle East and numerous Pacific islands all have problems with the introduced bird. Get this, in Hawaii not only has the myna encroached on and displaced native bird species, but has helped the spread of goddamn LANTANA all over the islands due to eating the berries and poopin’ the seeds. What’s the bet they have a hand in lantana ALSO being Australia’s most noxious weed I WILL WAIT HERE PATIENTLY FOR THE NO DOUBT BOUNTIFUL EVIDENCE, GET ON IT BOTANISTS.

Also, they’re just crap-looking. Yes, I’m stooping to shaming a bird on looks and I am unrepentant. It’s a sad brown blob with cranky face plumage that readily makes it look like the kind of jerk who’d peck nestlings to death and then frolic in the remains. What a prick of a bird. YOU CAN SEE IT IN ITS FACE.

And frankly I was at least going to give some concession to the noisy miner, which I’d previously only considered as a slightly less cranky-looking grey blob, expressing my condolences that they are so often overshadowed by their more notorious homonym, but as Michael’s Media Watch-style expose proves THEY’RE BASTARDS TOO! Can mynas and miners interbreed? Are we poised on a precipice of having society collapse in the face of a supermyna that’s going to go around booting us all out of our homes and making obnoxious birdsong all over the place?

WHAT DO YOU PLAN TO DO ABOUT THIS PRIME MINISTER MONEYBAGS O’ MAL???

Rating: all terrible, fund an Australian NASA, consign them to space and let Jupiter deal with them.

3 thoughts on “birds of australia: the common myna and the noisy miner”