The Peranakan Museum in Singapore is small but really lovely and interesting. Steph visited at 7:30 on a Friday night (half price Friday nights! That all museums would do such a thing).

Post is mostly about crockery and needlework, but does include some discussions of death (ooh ominous)  and musings on religion.

My family, as you know, is from Penang, and Peranakan business is highly influential there. How influential? Well, put it this way. When I walked through this exhibition I had a LOT of moments of ‘oh, but we do that’ and ‘but that’s just cos of Penang’, and a sudden suspicion about my grandfather, about whom I know very little.

The Museum is spread across three floors in an old house in Armenian Street. On the ground floor is the entry and the introductory exhibit, with a generalised ‘how the Peranakan came to be’ story and anecdotes from living Peranakan across Singapore, Indonesia and Malaysia. The upper two floors are the rotating exhibition and the permanent exhibitions. 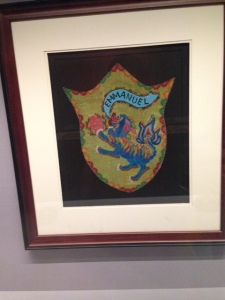 The rotating exhibition is about Nonya needlework, and it is EXCELLENT. There’s so much tiny detailing on every piece! There’s so many little anecdotes and side bits of information you learn! Like the beaded belt that had the Dutch flag embroidered into it, signifying the fighting between the Dutch and the Indies over to whom the Peranakan owed their allegiance! (In 1911 there was a Dutch decree that locally-born Chinese would be considered Dutch subjects, gross.)

This hilarious crest (to the left) is a panel embroidered by some guy’s mum. This guy from Penang studied medicine at Emmanuel College at Cambridge, and his mum recast the original lion as a Chinese luck dog with a flaming pearl. That is some fusion attitude and I love it. 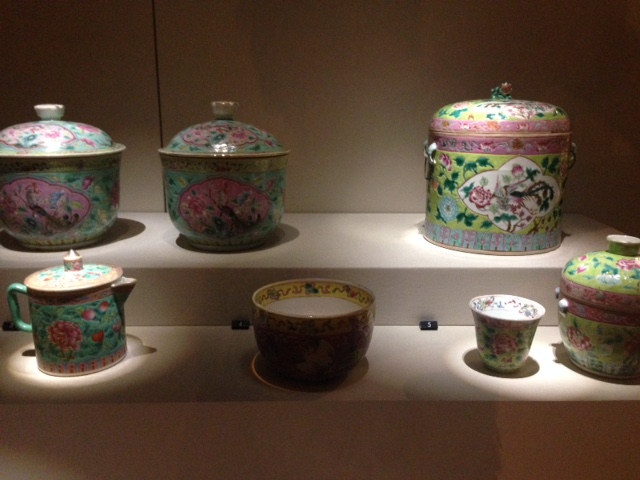 Above are a collection of pots, cups and teapots in a bunch of traditional patterns and styles. This makes me feel very comfortable! I remember not being allowed to touch any of these things as a kid in case I broke them. 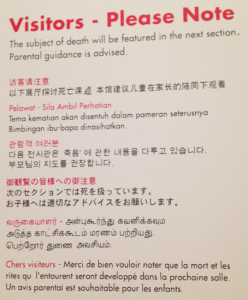 There was a significant section on deities and religion, and I spent a nice little time checking out the immortals and working out who I knew and who I didn’t. There was also a section on mourning, with a little room set out the way I’m familiar with (the bier, the images, etc), but nothing too intense and, importantly, nothing real. There was nobody in that bier. It was still prefaced by this sign. I mention it not because it’s significant, but because when I visited Poland I went on a walking tour of Gdansk. At one point we ended up in a church, and the tour guide told us, as we were walking through, “Oh, and these blocks beneath you are where people are lying”. I didn’t freak out, because I’m used to weird European ways now, mostly, but I did hiss to my companions: “Clearly not many Asians come through here, or they wouldn’t take us into a HOUSE OF DEAD WHITE PEOPLE without any warning.” I stand by that, and I feel like this sign supports that.

The shop is small and overcrowded with things, and I was the only person in there at 8:15 at night (aside from the shop auntie). I was in a bit of a hurry, and also a little broke, so I only bought the one thing, but I enjoyed browsing and would like to go back and browse some more; that I want to return  is obviously the sign of a good museum shop.

5 embroidered headpieces out of 5 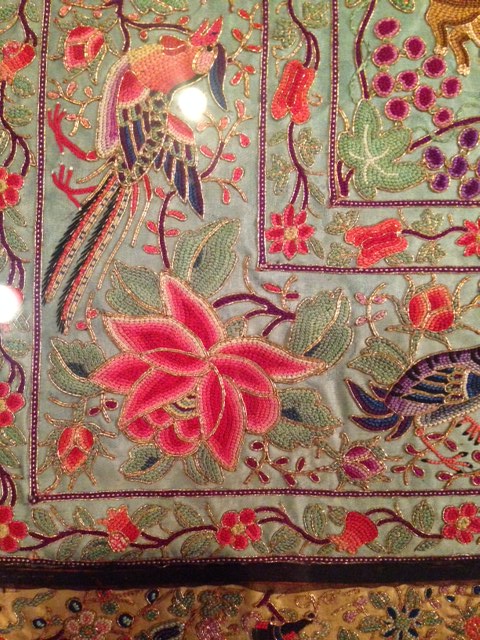