Queen of the Damned was filmed in Melbourne; 3000 Melbourne goths (and Canberran goths) were bussed out to Werribee to film the concert scene; the vampire bar was a derelict bar in Docklands built specially for the purpose. So hilarious. So amazing.

Claudia Black is in the movie for about 2 minutes. So much opportunity lost. So much amazingness.

Australian movies that would have been improved by the inclusion of vampire Claudia Black:

Pandora, about whom Anne Rice has written an entire book (AND WHO ACTUALLY SURVIVES THE ORIGINAL BOOK), appears earlier and more frequently. When Akasha turns up in the vampire house with lots of open doorways to the outside, she lets Vampire Matthew Newton go first and as a result doesn’t die, and we all rejoice because Vampire Matthew Newton is a dickhead. VCB helps Jesse through the change and continues to mentor her, with her eternal lesbian relationship with Lena Olin. Her BFF through time, Marius, leaves to go torment the Eighth Doctor. Bruce Spence hangs out.

Miranda wants to become a vampire because she loves Vampire Claudia Black so much. VCB is less enamoured of Miranda; instead, takes her back to the school. Sets all the girls free from the tyranny of early twentieth century Australia. The girls create a vampire collective in the school and kill all the men.

Fran is a great dancer, cos her awesome Auntie Vampire Claudia Black has taken the time and patience to really inspire her, unlike her jerkface dad. At no point does Mr Bill Hunter convince Scott to dance with Liz instead of Fran, and they go to the Pan Pacs. In the interim, Auntie VCB teaches Scott to be more respectful and Fran to be more fierce. When Charm Leachman cuts the music, Auntie VCB puts the music back and then eats Charm Leachman.

The Adventures of Priscilla, Queen of the Desert (1994)

Vampire Claudia Black prevents the really racist bits from happening, because she eats Bill Hunter and whisks Cynthia away to have an excellent, fufilling life not filled with racial stereotypes. In the absence of Bill Hunter, VCB saves Guy Pearce from the homophobes, eats them. She and Cynthia do the makeup for the drag show, because VCB loves the desert lights. Everybody goes back to Sydney and has a grand old time.

Vampire Claudia Black kills Bill Hunter; makes sure his assets make their way to his family; Muriel still marries that dude and it all ends the same way because it’s a movie about dreams and failure and oneself, and some things remain true about Australia.

Nobody makes any ridiculous messes and she teaches Dorothy the Dinosaur to stop being so fucking culturally appropriative.

Vampire Claudia Black gets rid of that white dude; she supports the Sapphires in getting to Vietnam and everything is all good. The US release DVD cover isn’t white-washed and focused on the non-Indigenous Australian person. 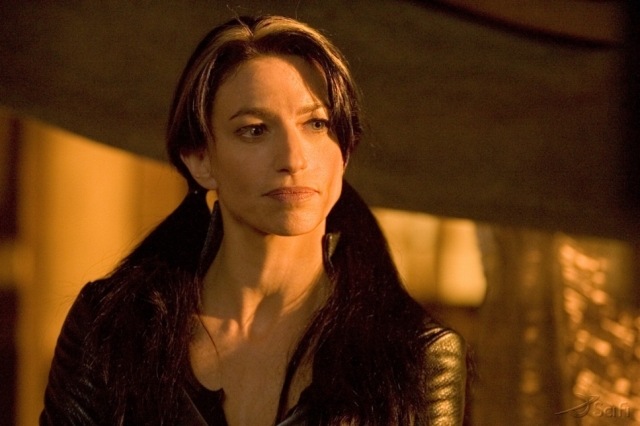 Vampire Claudia Black reads books to Little Ted on Play School. Her favourite co-presenters are Noni, Benita, and Jay Laga’aia, because she’s hot and she recognises awesomeness and hotness.

Special mention to the show that never existed but always will in our hearts, The Claudia Black Hotness and Variety Hour; and to Stargate SG1, which Claudia Black breathed life into for an extra two seasons through the power of her hotness.