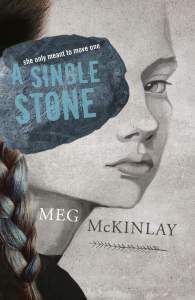 Every girl dreams of being part of the line – the chosen seven who tunnel deep into the mountain to find the harvest. No work is more important.

Jena is the leader of the line – strong, respected, reliable. And – as all girls must be – she is small; years of training have seen to that. It is not always easy but it is the way of things. And so a girl must wrap her limbs, lie still, deny herself a second bowl of stew. Or a first.

A Single Stone is a deliciously claustrophobic piece of semi-dystopian body horror for middle grade readers, inspired by Kafka (because why not?) and The Silver Chair (because it is the best Narnian book FIGHT ME).

I say semi-dystopian because, although Jena comes from an extremely dysfunctional community shaped by natural and man-made disasters and fundamentalist nature-worship, Jena’s world is not the be-all and end-all of human civilisation.  A lot of current dystopias, particularly for young readers, are basically technocratic totalitarian states.  Jena’s community is semi-medieval.  In fact, McKinlay never even makes it clear whether this is fantasy or science fiction, which is why labels like “spec fic” are so useful.

Body horror: this is a society where, from the moment of birth, promising girls are forced into the shape the community needs: small and slim.  They are expected to spend their days inside the mountain, moving from crevice to crevice in the dark, seeking mica, the mineral that acts as the community’s power source.  From having their limbs tightly wrapped from infancy to childhood, to underfeeding from birth, to postponing puberty for as long as possible.  Girls who don’t quite make the requirements might have their bones sculpted to make them that little bit smaller.

As I read it, I realised that I don’t ever need to worry about writing stuff too dark for a middle grade audience, because this already exists.

(Note: one of my major neuroses is a complete inability to cope with any kind of bone-sculpting, particularly to make limbs smaller.  As a teen, I had orthopaedic surgery to correct foot deformities, and that has left me really, really sensitive to that kind of thing.  Accounts of foot binding, for example, or any discussion thereof, will send me right out of a room.  A Single Stone very neatly walked the line between “shivery horror” and “actually triggery”.)

What’s notable about Jena’s story is that the antagonists — I can’t quite call them villains — are her predecessors, the Mothers who were once themselves part of the line.  This is a story about toxic matriarchy, bodily autonomy and reproductive agency in which men play very little part.  The Mothers aren’t twirling their metaphoric moustaches and cackling about their evil, they’re doing the best they can with their limited resources and imaginations.

There’s an interesting post on McKinlay’s blog, incidentally, about her discovery (after A Single Stone was published) that there are real mica mines, in which children — boys, in this case — are forced to perform body-altering labour until they get too old and big.  This is not only interesting, but a good example of how to deal with your book accidentally impinging on real world issues that you didn’t know about.

(I’m not geologically-minded, so I also appreciated the confirmation that McKinlay has ficitonalised mica for her purposes.  I was so confused as I read the Wikipedia page.)

I loved A Single Stone enough that I went straight off and read another of McKinlay’s middle grade novels, Surface Tension (published as Below in the US), a contemporary mystery about a twelve year old girl who makes a terrible discovery as she swims in the dam that covers a former town.  Surface Tension wasn’t quite as visceral as A Single Stone, but it was also incredibly compelling, and I plan to read every single middle grade book McKinlay writes.

(A note for commenter Jo, who was recently lamenting the tedium of romance in YA novels, and the general lack of asexuality therein: for platonic friendships, middle grade is the place to be!)