The Coalition party room voted not to allow a conscience vote on same-sex marriage. Tony Abbott has suggested it be put to a popular vote, or maybe a referendum, or maybe a plebiscite, terrifyingly demonstrating that some of our federal politicians don’t understand how our political system actually works.

Liberal Senator Eric Abetz suggested that because Dolce and Gabbana had never married, same-sex couples had no need of marriage.

The Prime Minister caught eating a whole raw spring onion whilst on site.

Liz asks: Is it possible that Tony Abbott just likes onions?  Is that a bad thing?  Should we as a nation be food shaming him for his unusual tastes when there are so many other weird and terrible things he does?  Is it just that it’s quite funny to watch someone eat a whole raw onion, French or otherwise?

An Asylum seeker who is married to an Australian PR was removed from her husband (and the centre in Brisbane where she was living, and the school where she was studying to receive her HSC) and is currently in a Darwin detention centre.

The state of Victoria’s new government logo looks like a map of Tasmania.  In every possible sense.

While the eyes of the world are on Ferguson, a Queensland police whistleblower who leaked a video of fellow officers assaulting a chef faces charges.  This forms part of a pattern of the Queensland police failing to investigate accusations of brutality from within its own ranks.

Steph says: I know how white person names work. This man has a fake name.

Someone suggested that Indigenous Australians were making booze out of vegemite and so vegemite should be banned in remote Indigenous communities. Vegemite watch began, but has since been retracted.

The chair of the parliamentary joint committee on intelligence and security thinks Australia should bomb Syria.

Steph says: no. Also call them Daesh, cos it makes ISIS mad to be delegitimised in this way and cos actual Middle-Eastern people have suggested we do so – the Western media is the only media who calls them ISIS.

Australia’s politicians come together with respect and honesty over this important issue. #kerning #auspol 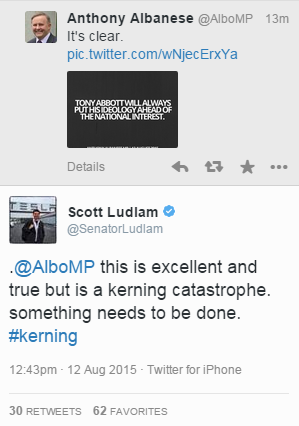 3 thoughts on “this week in: what has your government done to you”