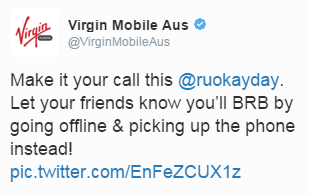 So here’s how it works. No Award has mental health issues. We admit that. There have been doctors involved, medication, all sorts of stuff.

An older person in Steph’s life was recently told by their GP they should consider seeing a psychiatrist. They went so ashen, so still. “Will I still be able to work?” They asked. We had to have a whole conversation about how a) there’s nothing wrong with seeing a psychiatrist, and b) their work doesn’t have to know, also.

There’s still a stigma around having a mental illness. And there’s a real danger in assuming that someone who looks sad or who is quiet might be the one who needs to be asked how they’re doing. The insidious thing about depression and suicide is that often the people you don’t suspect are the ones suffering; because depression helps you get very good at putting up a front.

There’s a feeling you get in your gut when someone who doesn’t care about your mental health enough to ask any other day of the year asks, because a campaign told them to, RUOK?

Mate, if I wanted you to know, I wouldn’t want you to ask me today.

Steph is going to quote from an Anonymous Friend of No Award here:

A lot of the people who get behind the day are the exact kind of people who would have ignored me at my worst.

Steph continues, this day is perfect for people who want to ignore the sorts of attention, friendship and actions that would actually help a person who isn’t okay.

It totally supports the Western idea that if you do one good public thing as an individual you’ve discharged your duty.

The branding and corporatisation of diseases is complicated: it’s one thing for there to be Parkinson’s Australia and the Walk in the Park (GET IT); it’s another for Steph’s workplace to have had a casual dress and barbecue day for RUOK Day.

RUOK Day doesn’t promote long term support after today, it doesn’t address societal and cultural causes of depression, and it encourages people with no experience with depression to meddle with sufferers in a way that could actually worsen their lives in all kinds of ways.

This is not to say that no good can come out of it, but, judging by the results of Liz’s informal Twitter poll, positive outcomes from RUOK day come from engagement with wider issues, rather than reducing it to one single question on one single day of the year.

For example, Another Anonymous Friend of No Award said:

At my old work, we had a nice morning tea, and the boss talked generally about mental health issues and contacting Beyond Blue etc.

It was pretty chill, and as far as I can remember, no one actually asked anyone if they were OK.

Another Anonymous Friend talked about people making her aware for the first time that there is (limited) Medicare coverage for therapy, and that made her feel more supported.

Because that’s the part that sets Liz’s anxiety off, and judging by the Twitter results, a lot of people feel the same way: living with a mental illness — even a minor anxiety disorder — there is a lot of pressure to be normal.  Whatever normal is, and it’s a concept that can change with the setting.

If I’m having an anxious day, I don’t want to dump all my feelings in a colleague’s lap — and it’s not fair to them to make them deal with that either.  I don’t know what their other problems are!  It’s none of my business!

I don’t want to dump an entire Hyperbole and a Half post in here, but Allie Brosh writes and draws about depression with extraordinary insight, and here she talks about the pressure she felt to comfort people after she had been honest with them about their feelings.  RUOK Day has bunting and cookie cutters.  It doesn’t have strategies for what to do when someone says, “Actually, no, I am not okay.”

It’s all very well meaning but No Award does not endorse this day.

2 thoughts on “R U OK? No, because turning mental health into a brand triggers my anxiety issues!”