This is short, unhappy, and features a lot of pictures of Penny Wong. 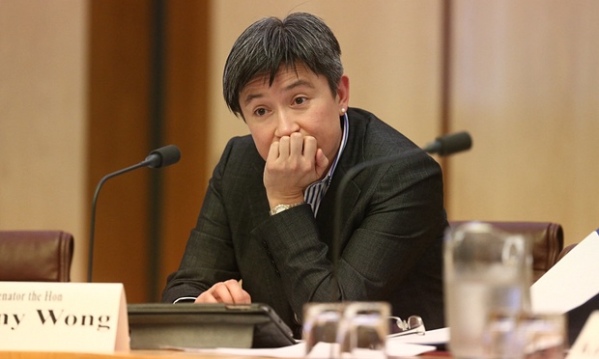 Like Senator Wong, I just have so many questions.

Like, why does Mark Gatiss keep getting writing gigs when his episodes are so consistently dull?  Some are bad.  Some are okay.  Most are just … there.

Gatiss is a fine actor, but as a writer, he’s the perfect example of technical prowess matched with a complete lack of imagination.  Like many current writers (Moffat), he glommed onto Doctor Who in Three’s era, and seems to look at the longest, dullest serials of that period and go, “Yes.  That is what Doctor Who should be.”

(Obviously, Doctor Who won’t be done properly until it’s taken over by a woman who fell in with with the series during the epic socialist adventures of the Seventh Doctor and Ace.  I have hopes for Sarah Dollard!)

If only being boring was the least of Gatiss’s problems.  For several years, he had a running thing where his scripts seriously sidelined … what’s that obscure minority called?  Oh yeah.  Women.

Someone has obviously said something, since his last couple of scripts have improved on that front.  “Sleep No More” even features a trans actress!

Oh.  She’s playing a genetically-engineered, intellectually impaired agender soldier whose romantic overtures and very existence are treated as disgusting by the cis guy she considers pretty.

So my next question is, how on earth did this make it all the way through script editing and onto our screens with no one saying anything?

(Answer: not enough diversity in the entire production crew.)

Now, my good friend Professor Pangaea (he’s not a real professor but he is a real prehistoric supercontinent!) pointed out that the Zygon episodes have a strong transphobic subtext, with all the stuff about Zygon refugees being forced to live in human bodies and conceal their true identities, and forcible changing, and anyone who tries to exist in their own body is shamed and/or killed.

Cis privilege means that sometimes I need these things pointed out to me.  But, um, this week?  The transphobic subtext was visible from space.  It was this close to being actual text.

I don’t understand how we went from “a really excellent, enjoyable season” to “the three most transphobic ever episodes of Doctor Who and they’re all consecutive yay”, but here we are.

I know Moffat and Gattiss are BFFs and all, but, as Sherlock proves, in terms of writing, they bring out the worst in each other.  Let me assure you that if I am ever in charge of any media ever and Stephanie keeps submitting work that is subpar and also offensive, I would tell her.  And I am actually 200% certain that she would do the same for me.

Anyway, that was gross.  How was the rest of the episode?

I don’t know if Penny Wong watches Doctor Who or ever has strong feelings about it, but if she ever does, I assume this is the face she would make while watching a story about evil eye gunk taking over the solar system through the power of found footage.

In conclusion, that was desperately boring and offensive, had very few redeeming qualities, and Penny Wong owns at least three suits and a lot of button-down shirts in different colours and patterns, which is adorable.