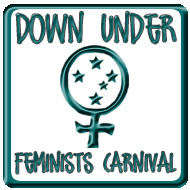 Hello Lolstralia and our antipodean Kiwi neighbour, and of course any other visitors to the blog! No Award brings you the Down Under Feminist Carnival, Edition 102! We last hosted edition 90, yes, 12 months ago, and that we keep hosting in November is only a little bit of a coincidence.

With thanks to Mary, Thalia, Chally, Bec and Ana for submitting links.

Steph says: I felt really overwhelmed trying to ‘categorise’ links this month, and I’m still not happy with where things have ended up – like, if something is about motherhood and missions and the Stolen Generation, is it right to put that under Indigenous business, or parenting, or gendered stuff? We’re complex and it’s complex and feminism definitely, as we all know, has a tendency towards the normalisation of whiteness and then the ghettoisation of anything outside of that. So anyway, we can definitely chat about that in the comments if people feel like it.

A reminder: how the carnival works

If you’d like to host a carnival: fill in this form to host. Hosting a carnival is a good way to really immerse yourself in antipodean feminists for a month, I find – it gives me a focus I don’t give it the rest of the year, flitting as I do from linkspam to linkspam and all the stresses in between. It’s very intense, but because we only host once a year it’s also okay 😀

This article full on makes Steph want to vom but here we are anyway, at Narratively, aka, how others see us: Pauling Hanson is the Donald Trump of Australia. And she just won.

The excellent Amy McQuire: If you think Aboriginal women are silent about domestic violence, you’re not listening

Laura Rademaker on Aboriginal missions in the early twentieth century: The Stolen Generation: motherhood in black and white

Tamariki, raupatu and the legacy of Margaret Thatcher

On Class, and Age, and that Housing Thing

Brigid Delany: Baby boomers have already taken all the houses, now they’re coming for our brunch

Annette is not alone in the uncertainty of her accommodation. The number of older women who are rental tenants in Australia is growing, and these women, if not already poor, are increasingly vulnerable to poverty and homelessness.

Would you like a hand with a poverty target Prime Minister?

Our Prime Minster says that it is too complicated to set a target to reduce child poverty. Apparently there are too many measures, and he has received advice from officials telling him to put this one in the too hard basket. We won’t dwell on his comparison between pest predators and children.

Also on low income in NZ: Judith Collins: Not Crushing the PC Brigade. Just (Mainly) Wrong and also about this, at Tea and Oranges: Offensive

On Manus, and Refugees

Ann Deslandes at Overland: Against empathy

At the root of such attempts to build greater empathy for less oppression is a theory of recognition – that is, that we humans oppress each other because we can’t see ourselves in the other, and vice versa.

Roz Bellamy: LGBTI people need doctors to leave their prejudice at the door

At Bluemilk: The kids are all right

The Plebiscite passed the lower house, but has no Senate date scheduled, and will (hopefully) not pass it anyway.

On Why We As Asians Have Failed The LGBTIQ Community

Now again I won’t speak on behalf of other Asians from other countries, but I can safely say that as an Asian Australian, there still lacks a level of tolerance, understanding and acceptance that our Asian Australian LGBTIQ communities exist.

(please note that some stories include mention of sexual assault)

Everyday Sexism report: Are girls and young women treated equally in Australia? Most say no

At the SMH: The Budgie Nine prove that Australian manhood is in desperate need of an update

Jeanette Winterson: The malice and sexism behind the ‘unmasking’ of Elena Ferrante

And an explainer on it: The doxxing of Elena Ferrante: the uproar over the novelist’s secret identity, explained

Steph talked about this article TWICE at UWRF, which was unexpected: This is the reason women should never give up their jobs

“U Triggered, Bro?”: Take It From A Comedian, Offence Isn’t Always As Edgy As You Think

Unfortunately, and somewhat ironically, Peter Jackson’s column is a product of the exact culture it’s admonishing: A culture which says rugby players should be more ashamed for hiring a stripper than allegedly assaulting her, a culture that questions whether a woman who was allegedly strangled and locked on a 14th story balcony while she begged to go home was complicit in her own death, and a culture which tut-tuts at Aaron Smith having sex in a public bathroom but doesn’t raise an eyebrow at the couple who waited outside, recording the incident on their cell phone.

Grabbing somebody is Assault, and sexual touch makes it Sexual Assault. Stop minimising this. #rapeculture101

Gender equality is what they call a ‘wicked problem’. There’s no one thing that’s going to happen that’s going to fix it. We have legislative change, and that’s great, but we still haven’t got that social change.

Nah, you can’t call yourself a feminist if you wish Kim Kardashian had died

Carly Findlay: The time I felt silenced by a person in power. (And why it’s taken me two years to speak up.)

Domestic violence leave: If a family is fleeing, like mine did, you don’t want to stand in their way

The ACC Clinical Pathway illustrates the dangers of ideological public policy, and the importance of community safeguards and advocacy in speaking truth to (rape culture, neo-liberal) power.  I’m mentioning it now because I think this government has learned from that public policy defeat, but not the lessons we might hope.  Quietly and quickly, calmly and efficiently they have muzzled the community sector so it will not happen again.

Things that are about race

Alice Pung: When race and class collide, the biggest challenge is using your voice

Luke Pearson on blackface, apologies and the media: Why do media ‘name and shame’, but not educate as well?

Another day, another idiot dressed up in a blackface costume – this time carrying a petrol can. It’s pretty unmistakably racist.

Chloe Wong at Overland, ‘Go back to China!’: on imposed identities

Christina Ho: Hothoused and hyper-racialised: the ethnic imbalance in our selective schools

Don Brash is my father, and these are conversations my father has in the pub he’s been drinking in for 45 years, with men who used to work in the freezing works or factories of the Hutt Valley.  Dad says his pub mates, some of whom are Māori, don’t believe in people being treated differently.  The consensus, according to him, is that treating everyone the same is the way to stop racism.

Somehow, the prevailing narrative of the immigrant or the refugee has become one of laziness, one that professes fears of leeching off the government, but at the same time, also taking jobs away from “Australians who deserve them”. Narratives of fear are far more effective than those that promote positivity, and in the past couple of years, this has become abundantly clear. It has become a way to maintain supremacy in a world that is catching up to them, bullies attempting to put down those who are different, or those who may threaten their previously uncontested span of power.

At Gimped: Why We Must Not Go Gently Into The Night

Most of all, it is hard to explain how we are devalued and treated as ‘less than’.  And as an activist who fights against violence, abuse and neglect of disabled people, I have hundreds of examples where disabled people have been murdered, where their perpetrators have walked free, sometimes into paid interviews.  Where our deaths have been described as mercy killings and our lives have been described as ‘burdensome’.

At Junkee: What Happens When U R Not OK? It’s Time For Australia’s Next Steps On Mental Health

Parenting; and Kids in Spaces

This weekend I found myself in two situations with my children where I felt deeply uncomfortable about what happened. Twice in a just a few minutes where we experienced street harassment. They’ve stuck in my brain ever since. I can’t help but ask myself if I could have done better, not for my sake, but for my son.

The NZ state, making children vulnerable since way back

At Tea and Oranges: We should definitely fund ECE better

Thalia at Sacraparental: Kind, wise, brave & joyful: How we created our family list of core values for our family

At Lulastic: The beautiful side of your spirited child and Five reasons to stop forcing good manners on our kids

In which I get all philosophical about having kiddos

This Again: “Asian Flavours” in SFF

The colonial critique in Hunt for the Wilderpeople

Critics have called HFTW a ‘mini-masterpiece’ and it’s the expertly travelled paths between these different themes that make it so, and despite exploring the experience of colonialism and the carceral in New Zealand, the film has universal themes. The success of the film in Australia and the US (both settler-colonial states with racialised prison-industrial complexes) makes sense.

13 fabulous kids’ tv shows that pass the Maisy test and have other great features, too

A short history of the dangers of travel writing

Migration In A Warming World

‘Water is Life’: A roundtable about coasts and rivers affected by climate change

Gabriel Stroud on a thing many of us struggled with: Year 12 exams: Our kids deserve better than this

Marian Quartly on a piece of her family history (and also Australian law in the early 1900s): Marital separation and family heroines

Waiting for you in the sun

People die from exposure – pay me!

Revealed: the systemic exploitation of migrant workers in Australia

An interview with: A.C. Buchanan: And Still the Forests Grow though we are Gone

5 thoughts on “Down Under Feminist Carnival 102!”