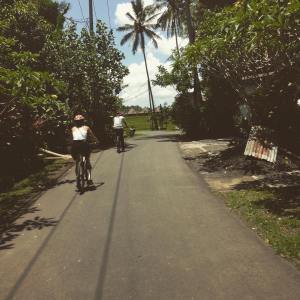 Today, let’s talk about your favourite topic and mine, colonialism.

I spent three days at Ubud Writers and Readers Festival last week, and it was lovely! And currently the Singapore Writers Festival is on, and I am attending that as I’m able. I have many thoughts about many things, and I’m going to spread them out over a few days, actually probably a couple of weeks TBH, because Liz needs space to talk about classic boarding school novels and Star Trek and things like that.

On the first day of UWRF, I took time out from the festival to go on a bike ride of the rice paddies. (For future reference, I wish I hadn’t done this – I wish I’d attended the sessions instead. I got sunstroke, which basically ruined Day One of the festival for me, and of course makes me a failure as an Aussie.)

On the ride I met a woman, an Austrian woman who’s lived in Singapore for five years. She likes Ubud Writers and Readers Festival. She likes it more than the Singapore Writers Festival, because the latter has too many Singaporeans.

There was a strain running through UWRF, and that strain was this: despite UWRF being ostensibly a POC space, located as it is in Ubud, and staffed by many Indonesians, there is still a sense of colonialism running through it, a sense that as POC, non westerners, we are still performing emotional labour.

In a session featuring my brain crush, Agustinus Wibowo, a woman in the audience complimented Agustinus on his excellent English, and asked how he’d learned it. “In school,” he said, and turned it around, talking about how he learns the language wherever he goes when he can, and so he knows a little Chinese amongst other languages. (He studied for 5 years in China; his Mandarin is better than “a little.”)

During the session, Agustinus had also spoken about borders, imposed by white people thousands of kilometres away. Later in the day, Voranai Vanijaka talked on the USA in Asia, suggesting that the USA’s interest in Asia is related to an interest in democracy only in so far as it is a democracy that leads to capitalism. The day before, a translator spoke about translating into ‘a foreign language’. Another translator (Australian, Indonesia – English) spoke about the concept of ‘domesticisation’, where one ‘smoothes’ over the cultural aspects during translation. The pattern here is the assumption of white influence on our lives, and the normalcy of that.

Whose cultures are we supposed to replicate, and whose are we smoothing over? Where does that leave people writing their own cultures in English?

Spoilers this is a trick question, I know exactly what assumptions are embedded in translation and English language writing #UWRF16

The set up to an audience question, during a later panel on Being in Exile, really highlights this weird trend: “We’re all talking in English, perhaps pretending we’re at home.” This, to a panel where the actual panelists (excluding the moderator) were all people for whom English is, at the very least, a second language. So, sir, perhaps you’re pretending you’re at home. But that glosses over the actual situation, which is that in this space, this space constructed in Ubud, an ostensibly POC space, we are still performing and providing answers. And that we speak English in these spaces not because we’re pretending to be at home, but because we’re offered little other choice by the white people who have come before you.

The moderator of this panel admitted that she didn’t know how to pronounce Çiler’s name, and as a result she pronounced it two different ways. What is that if not a sign of the terrible colonialism carried in the heart, that it’s not completely rude and mortifying that she couldn’t get that right before the panel, that she somehow thought it was a quirk?

In that same panel, Tenzin Choegyal spoke on Buddhism, and Tibet. He’s in exile from Tibet, it’s all very relevant to his experience. But after an audience member asked about the western romanticisation of Tibet and Buddhism as being a burden, upon which Tenzin then elaborated, the next three questions were all from Australians (or, at least, people with Australian accents and the appearance of being white), asking Tenzin variations on Buddhism (what’s your thought about something something Dalai Lama, for example). Çilar İlhan, on the same panel, was asked a question about helping people persecuted by the Turkish government. And I’m sure those askers would all argue about the relevance to the question of exile. But Çilar, a random Turkish writer, cannot be expected to have the answer to the Turkish government persecuting Kurdish expats in Indonesia. And it’s led me to thinking about Marlon James’ recent article, about not being on diversity panels. Not because of the panels themselves, but because of the questions asked.

I don’t have an answer; I’m not sure what question I’m asking.

But I heard a lot at UWRF about borders of the heart, and the idea of home in the heart, and when taken together these little moments all look like the colonialism carried within. That the normal is still the western normal, that knowing English, i.e. another language, is somehow unusual rather than evidence of colonialism. (The number of Australians who don’t realise how weird it is to be monolingual is high, anecdotally).

I had a good time at UWRF; I would go again another year, perhaps even next year. It’s still, to date, the least white/western writers festival I’ve ever been to. And yet it still had this undercurrent that angered me.

3 thoughts on “The Colonialism in Your Heart”