This Classic Who serial originally aired in 1966. I’m not sure when it hit Australia, but my dad watched it on the ABC as a child, and the Very First Regeneration (Hartnell to Troughton) made enough of an impression on him that he could describe certain scenes to us kids.

But because early television was ephemeral (and the BBC needed to reuse that tape a bunch of times and then burn it), the serial itself was lost. Only the audio track survived.

To celebrate the serial’s 50th anniversary, and to make a quick buck, the BBC has “restored” the video via animation, and the result has been given a limited cinema run.

First of all, let me say this: Daleks are terrifying. They were terrifying when I was a child, they’re terrifying now, probably this has something to do with the game Dad used to play where he’d chase us around going, “Exterminate! Exterminate!” while being much faster and more relentless than us kids — oh yes, and we started playing that game before I encountered a Dalek on television, so when I finally saw one on screen, child!logic dictated they must be a real thing out there in the world.

“Power” was an ambitious serial featuring a hell of a lot of Daleks, and they’re served well by animation. Instead of having to fill backgrounds with cardboard cut-outs, the animators could just copy and paste and have a room full of genocidal pepperpots.

If this was just a cartoon about Daleks, it would be great.

I feel slightly bad about pointing out how terrible the animation of humans is, because the animators straight up say in the post-feature doco that they didn’t have enough time or money to do this job properly. So let me say first of all that I’m more critical of the BBC for not allocating a proper budget to this project, and then flogging it in cinemas.

Having said that, here’s a quick list of hilarious animation and art blunders I spotted: 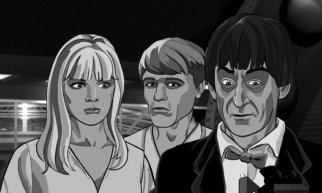 So what was good?

It’s a mixed bag. With the limited budget, the animators didn’t get a chance to expand the setting or — aside from the Daleks themselves, the non-wobbly walls and some nifty lighting work — transcend the original. It exists in an awkward space between Straight Reproduction and Revisionist New Take.

On the other hand, it’s a really good story, and if (like me) you don’t much care for audio drama, the animations do help.

Just don’t waste your money and see it at the cinema.

The Power of the Daleks: in which the real homicidal maniacs are the humans we met along the… https://t.co/pI5bvzs3Bl

I was going to make fun of the BBC’s terrible animation, but then the (modern) director was like, we had no money and no time.

ANYWAY the best thing about Power of the Daleks, aside from the great script, was the visual similarity to Archer.

“And that’s how you get Daleks.”