In all practical terms, this isn’t much of a change.  Turnbull may believe in climate change and marriage equality, but there’s no sign he’s actually going to pursue any changes to Liberal policies there.  In his first press conference this morning, he declared his commitment to mandatory detention for asylum seekers, so the change of prime minister just puts a new face on the same old human rights violations.

LUCKILY, Australians are good at finding the lighter side of a political backstabbing, and many memes and lols were had. No Award brings you some bits they most enjoyed/most noted. Mostly memes and hilarious rants.

Friend of No Award Ashleigh would like it noted:

No Award in fact had already adopted this exact sentiment as official No Award policy.

Steph is FASCINATED by the terrible things ex premier Jeff Kennett has been saying. First he went on a rant on his twitter:

Profoundly disappointing. Fed Libs clear majority in Parlt. Now putting self before public interest. Speculation a sign of weakness not strength. When business’s or sports bodies challenged they come together to meet the challenge. Fed Libs & Fed ALP continuing a decade of failed leadership. A pox on both your houses until you demonstrate you have Aust rather than your own interest at heart.

Malcolm Turnbull, You self centered, selfish individual. It has always been about you. Zoe Kerry Packer, and your performance for the few years. You and K Rudd have so much in common.. Pity you did not have the discipline that is represented by Andrew Hastie. You selfish undisciplined individual. If you win the spill you lose. You have ignored the Govts wins and put your own interests above all.

AMAZING. Then he went for a rant on Radio National about Malcolm’s “extreme egotism” which, let me tell you, I am SHOCKED to discover egotism coming from very wealthy members of the Liberal Party. SHOCKED and HORRIFIED and I am clutching my repurposed scrabble tile necklace in surprise.

Anyway then Jeff went on Sunrise this morning and did this amazing backflip:

I was angry yesterday, but words are cheap,” he said. “I might have said some words that upset a few people. Maybe some of my colleagues won’t talk to me.”

“It is a new day in the start of the rest of our lives.

“I will fully support our new PM.”

Malcolm has a dog blog. (Thanks to @mxcreant for this excellent reveal)

And feelings about bed time:

(Liz, who is dedicated to early bedtimes, agrees.)

Stuff from the last spill that Steph thought was interesting:

A reminder that Australia getting a new prime minister is an ideal time to check the battery in your smoke alarm.

And now for some memes. Attributions have been attempted but Steph got a number of them from Tumblr and you know how that place is, it’s a hotbed of  inability to attribute.

Liz explained this hashtag to a foreigner thusly:

Tony Abbott was caught on camera eating an onion. A raw onion with its skin on.

Three times if you count the unearthed archive footage of him eating a … was it a French onion?

SUFFICE TO SAY, I don’t want to food shame him in any way, but it is a decidedly odd thing to do, let alone more than once, and there were onion thinkpieces, and questions about whether it was part of his hypermasculinity schtick, or had he just never encountered a raw onion in its natural state because his wife always cooks them, or … yeah. It was a thing. And by far the easiest thing to mock, out of everything he’s done, because there’s no body count.

Even The New Yorker covered #putoutyouronions! 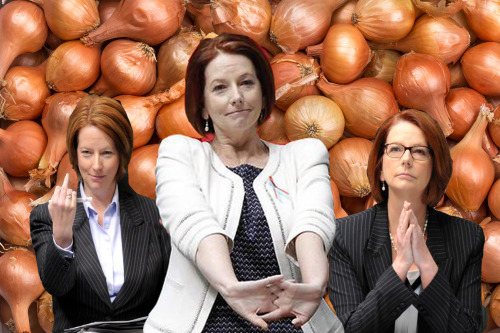 I'm not sure how I forgot… we're also farewelling our Minister for Women. #putoutyouronions #libspill #auspol pic.twitter.com/jPEdqtgq54 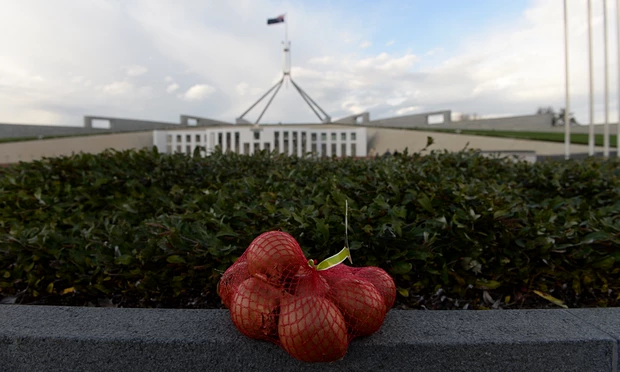 Backstabbing will be unacceptable in my new government. If you come at the queen you best not miss #LeeLinforPM #auspol #libspill

What does it say about the state of politics in this country when I'm trending during #libspill? That I'm amazing obviously #LeeLinforPM

Liz also threw her hat in the ring before conceding to the once and future Prime Chinister.

Quick, who wants to vote for me as Liberal leader? And then make the Liberal Party elect me as their leader?

Allegations that my leadership of the Liberal Party will involve mostly Harold Holt jokes are entirely correct.

* May The Sea Return Him.

I have rescinded my candidacy for leadership of the Liberal Party. All hail @LeeLinChinSBS #LeeLinforPM

Before moving onto really important things: Doctor Who references.

In the greater scheme of things, Turnbull taking over is Ainley!Master regenerating into Eric Roberts. Slicker, better dressed, still evil.

I hope you're all now picturing Turnbull in full Time Lord formalwear. You're welcome, nerds.

…does that make Julie Bishop Missy? 'Cos I can see it, I really can.

INCIDENTALLY, further to the classifying of Turnbull as Roberts!Master and Abbott as Ainley, @purple_smurf and I have expanded on the theme.

We are torn re: Julie Bishop: Missy or the Rani? There really aren't enough women Libs to go around.

But Bronwyn Bishop is most definitely Inquisitor Darkel. Howard is Borusa: kind of immortal, kind of a dick.

And Credlin, of course, is Leela: the powe behind the throne who talks softly and carries a very sharp knife.

That would have been funnier if I’d caught the typo in time.

(We wish to apologise to the upstanding corrupt, xenophobic technocrats of Gallifrey for comparing them to the Liberal Party.)

And now we wake up to the aftermath.  The hangover, if you will.  It is customary for the outgoing prime minister to hand in their resignation to the Governor-General before the new one can be sworn in.  But there’s no sign of Tony today just yet…

INT. PM'S OFFICE – MORNING #libspill CREDLIN Come out. ABBOTT Nope, nope, nope. CREDLIN Do you want me to sit in the cupboard with you?

2 thoughts on “new pm who dis”