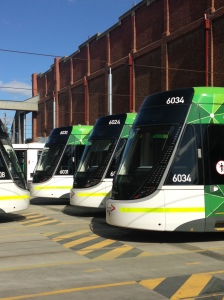 Steph and BFF of No Award Danni cycled to the *New* Preston Tram Depot (it’s like New Beijing and New New York; here at New Preston Tram Depot, we are in our dystopic future) and loitered in a queue for a while. We think Yarra Trams was entirely unprepared for how popular it would be – before the gates opened, the queue went around the corner. This time in the queue gave us time to notice the following:

Preston Tram Depot has recently been refurbished, and is now where all trams go for collision wo 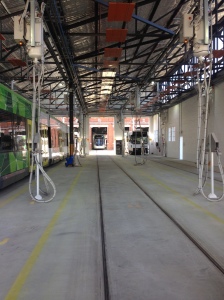 rks. It can berth 75 trams, and has a whole bunch of workshops, some of which have yet to be used (you can tell, because they’re super clean).

Our first stop (after the safety briefing) was the tram bathrooms, where trams get filled with sand. You may have noticed when you’ve been on a tram that some of the walls have sand in them, and wondered what is up with that sand? That’s to help the trams brake. It just gives them extra traction when they’re tramming along in Melbourne’s weather, and it’s part of why Yarra Trams has track cleaners.

(Liz: I HAVE ALWAYS WONDERED ABOUT THE SAND!)

We got to check out the everyday workshops, which are very clean and shiny , and I was super excited to find their electricity runs on a really simple close mechanism. There’s pits for under the trams, and cranes on rails for over the trams, and Danni started expressing a need to be a tramgineer. (She has an engineering degree; Yarra Trams, contact her!) 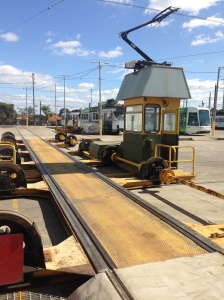 Probably my favourite thing I got to see at the New Preston Tram Depot was the traverser. It’s this image to the right in tram colours with a pantograph and a long set of tracks. This set of tracks is the length of a tram, and a traverser is BASICALLY a tram-sized fork lift. You drive a tram onto the traverser, and the traverser shifts the tram over onto the next set of tracks. AMAZING. This one is due to be decommissioned, and I desperately hope it’s going to end up in the Hawthorn Tram Museum, because they’re so cool.

On our way out of the depot we popped into the tram drivers’ simulator, where new tram drivers have to clock up 10 hours of training before they and a teacher get into an actual tram, and I was delighted to notice the simulator is so excellent, it features a virtual Lord of the Fries at Flinders Street in its virtual Melbourne. A++ virtual reality attention to detail. 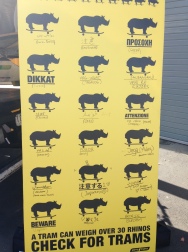 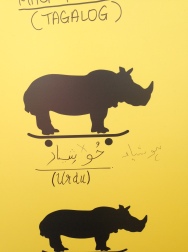 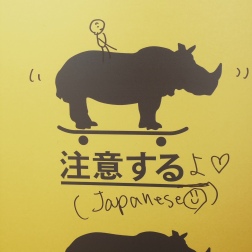 We also encountered some of the rhino safety signs; my favourites were probably the corrected Urdo (faint, centre image) and the correct Japanese (comes with love heart).

I found out about the Depot Open Day and the tours (for which one had to register via Eventbrite) via the Hawthorn Tram Museum twitter. Some older ex-tram peeps in the queue (“I’m not very into trams. I’ve only written three books about them.”) were incensed because they hadn’t had a chance to book into the tour as it apparently hadn’t been on the website or anything; interestingly, the survey we did upon exit also failed to mention social media as a means of learning about the community day.

We didn’t see any Zeds, which will be retired in the next few weeks. All I want is to buy one and turn it into a travelling bar.

(Liz, who struggled into a Zed the other day, notes that the hypothetical travelling Zed bar would not be accessible. PROBLEMATIC.)