First Dog on the Moon’s comedy show covered, among other things, the power of cartoons to change the world. Accordingly, No Award’s account of the evening is hereby presented in cartoon form. (With description at the end for people using screenreaders.) 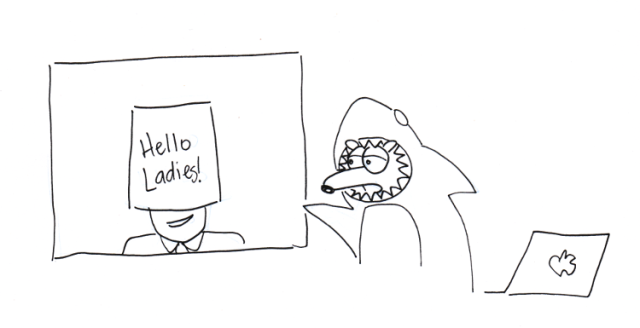 Steph: “Some baba ghanoush, ASIO eggplant Liz?”
Liz: “Get in the van.”]

So this weekend, Liz attended First Dog’s Melbourne International Comedy Festival show, An Evening With First Dog On The Moon.

[Image: First Dog wearing a shark costume, pointing a fin at a screen on which is depicted Tony Abbott wearing a bucket on his head. Written on the bucket is “Hello Ladies!”]

It was as entertaining as you’d expect from a PowerPoint presentation by a man wearing a shark costume. You know. Nothing out of the ordinary.

It must be said that the show rather suffered from, um, the fact that Tony Abbott isn’t PM anymore.

(Comedy: literally the only field of human endeavour where that is a problem.)

And maybe some bits were recycled from the cartoons. They were still funny.

There was an opportunity at the end to buy merch and have it signed. I always get this terrible urge to be funny. It never ends well.

This time I settled for “keen and curious”. I asked Mr Onthemoon about his fonts. We talked kerning. If I had a bucket list, I guess I could cross something off. Maybe.

Important things to take away:

First Dog: “I use a font based on my own handwriting. But the kerning on the special characters is wrong.”
Liz: “Oh, that is the worst.”]

2 thoughts on “An evening with First Dog on the Moon”